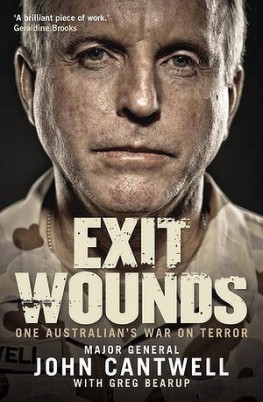 Overall enjoyment rating: 9 out of 10 stars

As a country boy from Queensland, John Cantwell signed up to the army as a private and rose to the rank of major general. He was on the front line in 1991 as Coalition forces fitted bulldozer blades to tanks and buried alive Iraqi troops in their trenches. He fought in Baghdad in 2006 and saw what a car bomb does to a marketplace crowded with women and children. In 2010 he commanded the Australian forces in Afghanistan when ten of his soldiers were killed. He returned to Australia in 2011 to be considered for the job of chief of the Australian Army. Instead, he ended up in a psychiatric hospital.

Exit Wounds is the compassionate and deeply human account of one man’s tour of the War on Terror, the moving story of life on a modern battlefield: from the nightmare of cheating death in a minefield, to the poignancy of calling home while under rocket fire in Baghdad, to the utter despair of looking into the face of a dead soldier before sending him home to his mother. He has hidden his post traumatic stress disorder for decades, fearing it will affect his career.

Australia has been at war for the past twenty years and yet there has been no stand-out account from these conflicts—Exit Wounds is it. Raw, candid and eye-opening, no one who reads this book will be unmoved, nor forget its imagery or words. – Stolen from Goodreads.com

This book broke my heart. While reading the last third of the book I pretty much cried the whole way. It wasn’t what I expected, usually military accounts make for dry reading, but Exit Wounds is a whole different kettle of fish. Major General John Cantwell has written a memoir that is full of action, bravery and emotion. By laying himself bare he has given the soldiers he served with a differing opinion, one that says that mental illness isn’t something to be shoved to the side, that it is not a sign of weakness – it is a disease.

Exit Wounds is split into four sections – The first Gulf War, The Second Gulf War, the Middle East area of Operations (mainly Afghanistan) and a very small final section back home in Australia. John’s wife also write two chapters that add a different angle, often pointing out things that Cantwell is too proud (often not wanting to blow his own horn) to admit. She also discusses the things that she thinks are important.

The first section of the novel – the First Gulf War – is action packed, on the front lines account of combat while attached to the British Military. It gets the adrenaline pumping and allows an insight into Cantwell as an officer, but also his humanity and humour. There is also the introduction to the beginning of his battle with mental illness.

The second section of the novel – in Iraq – is interesting in its comparisons with the first, this time he has a more senior role and makes decisions that influence larger groups of troops. He works hard, so unbelievably hard! This part of the novel introduces the John that we come to know by the end of the novel, one battling against the odds.

The Middle East Area of Operations follows Cantwell in a role with even more responsibility, and the guilt and situations he finds to put upon himself makes me cry. The deaths of the Australian Diggers is overwhelming, and the recounts are described in a factual, but emotionally hard hitting way.

The final part of the book – especially the chapter named Exit Wounds – is where the book really comes into its own. Cantwell is forced to make some very difficult decisions, and as always, he puts the Army and the Diggers first. His battle with PTSD is virulent and it is heartbreaking to see someone who is a hero be wracked with guilt. I would certainly love to meet John Cantwell to shake his hand and thank him for his service, but this book has reminded me that there isn’t enough recognition of what our Servicemen and women go through for our country. Regardless of the reasons we went to war, regardless of political posturing, we need to be behind our troops, not only when they are in a combat zone, but also when they are home.