This post is coming a little later than I had wanted, but I’ve had to take the past week easy because I’ve not been well. However, this is the final thing for Bout of Books I wanted to do, and here it is. On day Four of Bout of Books I hosted the Modern to Classic Challenge and there were so many awesome responses, that I felt like I should write a little wrap up and summary of the submissions. I will not pick on anyone but I want to talk in general terms of the books that so many people spoke about. There were some trends that seemed to stick out, for example, a large bunch of these novels fell into the dystopian genre.

The most nominated novel would have to be The Hunger Games. So many people stated that this book breathed new life into the dystopian genre and therefore would be considered a classic for years to come. I think The Hunger Games is wildly popular right now but I wonder if the popularity will last 50 years, but at this point we cannot know and I respect that most people in the book blogging community hold The Hunger Games as being one of the best novels of this generation.

Harry Potter and The Deathly Hallows also had many votes. I had a feeling if I did not put the 10 year restriction on the challenge that everyone would just say Harry Potter and the Philosopher’s Stone. I did not expect so many people to still advocate the last book of the series. However, so many people love this series that I should not be surprised!

Other novels that deserve honourable mentions include The Fault in Our Stars which I have not read or seen the film. I am not sure my views on John Green, I have seen some literature out there that criticises his style of writing and the way he portrays teenagers which makes me dubious and I usually do not recommend him to my students, because I have not read his work. He is wildly popular and maybe I need to pluck my head out of the sand and read one of his books because apparently the Fault in Our Stars is going to be a classic one day.

Ready Player One seems to be well respected and there were many reasons for why this book would be considered a classic in the future.Its one of those books that everyone has heard of, even if they haven’t read it! Although, everyone should read it.

It would be remiss of me if I did not mention The Book Thief by Marcus Zusak many people answered the challenge with this book, and with many different reasons. I do love The Book Thief, but  just like with The Hunger Games I am not sure if this book’s hype will last for long enough.

Other honourable mentions go to The Help and the works of Rainbow Rowell. My ignorance of Rowell’s books will mean that I refrain from making any comment, but the winner of the challenge did pick her novel Eleanor & Park as her pick.

I noticed that so many of the books were YA or borderline YA, there were few dense heavy books put forth. This is really interesting, because I think so many of the classics of the past were dense and sometimes difficult to read, whereas most of the books of our generation that get hugely popular are easy to read. I’m not sure if this is just because of the blogosphere’s obsession with YA, or if it reflects the wider population…

I would like to congratulate Keely, of I Read It and Wept, for winning! Please check out her blog, she has some really interesting content! 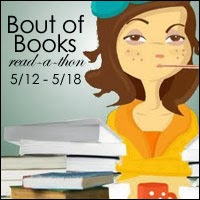 So… here we are! Another Bout of Books over and done with, and I have to say, although I didn’t do heaps of reading, I did enjoy the experience. I hosted my first ever challenge and a giveaway – which if I may say so myself, went swimmingly.

These are my final reading stats:

The Sniper and the Wolf by Scott McEwen – 400p

I think this is about on par with previous Bout of Books that I have completed – a little disappointing considering I read much quicker these days. However – A whole morning/afternoon was spent commenting on many journals and running the challenge, so I feel like my participation this time has been better.

I really need to thank the ladies that run Bout of Books, they have been so helpful, I on many occasions had to email them to ask things, and their responses were amazing. They put so much time and effort into this event, and I have enjoyed participating.

Day 2 & 3 certainly did not go to plan – I hardly read at all on day 2 – I had my pupils dilated and then couldn’t read, so that was fun. I did listen to a couple of hours of Jane Eyre, but that was it. Day 3 was spent with my sister watching copious amounts of Chicago P.D. Which was fun, but didn’t add to any reading goals. I am looking forward to reading more of The Sniper and The Wolf, as it is fantastic!

5%  of The Sniper and The Wolf

35p of The Secret Agent

The Secret Agent by Joseph Conrad

Hi guys! Today’s challenge arrives a little late. Sorry about that, I can’t handle timezones! I hope you’re having a lovely readathon and getting in some quality reading. I’m delighted to be able to present today’s challenge, it is such an honour to contribute to one of the bookish events of the year!

THE CHALLENGE Share one book that you believe will be considered a classic in 100 years time. Simple? I do have a few caveats, the book must have been published in or after 2005 and you need to provide two reasons for why this book will be a classic.

HOW TO ENTER You can enter this competition on any platform, including posts on your blog, on twitter, facebook, goodreads or in the comments of this blog post. Include a link to the entry in your comment. Also, make sure the post is public, so I can check out your awesome answers!

THE CHALLENGE IS NOW OVER! NO NEW COMMENTS WILL BE APPROVED

Well – my first day went swimmingly! I read a book and a bit, listened to 2 hours of Jane Eyre on audiobook and finished the first little bootie for my neice/nephew!

My answers to the bookish survey challenge hosted at Writing My Own Fairytale.

1. How do you organize your shelves?

My shelves are split into two large bookcases – one for my TBR/books I need often and the other of read books that I wish to keep. I give away/swap any book that isn’t a four or five star rating.

I loved My Brilliant Career which is a romance novel. I usually dislike them!

That would be The Picture of Dorian Grey by Oscar Wilde. Ah… I’m still thinking about how amazing it was.

4. What book are you most excited to read during the read-a-thon?

I am really excited to read Savage Tide by Greg Barron. The first in this series, Rotten Gods, has stuck with me, and I read it about three years ago. I don’t know why it has taken me this long to read the second book in the series. Rotten Gods was a really slick political thriller with lots of action, interesting characters and an Australian perspective. All positives in my eyes.

5. What book do you recommend the most?

I am CONSTANTLY recommending Hard Landing by Stephen Leather. I JUST WANT EVERYONE TO READ THIS SERIES. It is perfect for people who like Reacher-esque stories, but much less samey. Plus, I constantly wish to punch Reacher in the face, whereas I wish to do other things to Mr. Shepherd’s face.

Thanks for hosting the first challenge, Lori!

35p of The Secret Agent

The Secret Agent by Joseph Conrad

My TBR for day 2 is to start Savage Tide, read some Gone with the Wind and listen to some more of Jane Eyre

So, I’m really excited to be participating in this Bout of Books – I’m going to be able to set a couple of hours aside each day to read, and I can’t wait!

My goals are pretty loose this readathon – and that is to be active on twitter, to update my blog daily and to read at least two books. I will also read the first 10 chapters of Gone With The Wind. I want to participate in a challenge or two, but if I don’t feel like participating then I won’t.

Australia and Canada in Afghanistan by Jack Cunningham and William Maley

The Godfather by Mario Puzo

Any book that takes my fancy from my TBR bookcase.

I’m looking forward to chatting with everyone this readathon, if you are a twitterer, please add me @bookybecksa or let me know your handle so we can cheer each other on!

I’m going to be participating in next months Bout of Books. This will be my third and I am already excited for it. I will be posting my TBR and goals closer to the date, but let’s just say it’s going to be an intense week of reading!