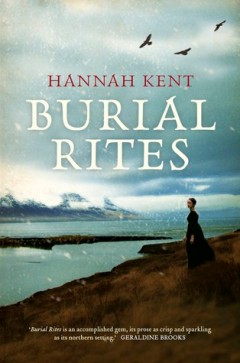 In northern Iceland, 1829, Agnes Magnusdottir is condemned to death for her part in the brutal murder of two men.

Agnes is sent to wait out the time leading to her execution on the farm of District Officer Jon Jonsson, his wife and their two daughters. Horrified to have a convicted murderess in their midst, the family avoids speaking with Agnes. Only Toti, the young assistant reverend appointed as Agnes’ spiritual guardian, is compelled to try to understand her, as he attempts to salvage her soul. As the summer months fall away to winter and the hardships of rural life force the household to work side by side, Agnes’ ill-fated tale of longing and betrayal begins to emerge. And as the days to her execution draw closer, the question burns: did she or didn’t she?

Based on a true story, Burial Rites is a deeply moving novel about personal freedom: who we are seen to be versus who we believe ourselves to be, and the ways in which we will risk everything for love. In beautiful, cut-glass prose, Hannah Kent portrays Iceland’s formidable landscape, where every day is a battle for survival, and asks, how can one woman hope to endure when her life depends upon the stories told by others? – Shamelessly stolen from Goodreads.com

I was blown away by Burial Rites, which is a fantastic novel that explores the execution of Agnes Magnusdottir, a woman condemned to death as a murderess. I’ll be honest, the topic and the setting are not favourites of mine, but I found this story to be addictive.

The characters were intriguing, and I found myself in love with Margret, who was such a wonderful and vibrant character – such a good contrast to Agnes, another character that simply came to life. There were quite a few characters to follow, and I did find the way the surnames and nicknames worked at times to be confusing – also the huge amount of men named Jon – I couldn’t keep them straight in my head at the beginning and during the middle of the novel.

For me, the true brilliance of Burial Rites is the way that Kent slowly but skilfully changes my opinions on nearly all of the characters at some stage. Agnes begins as a cold hearted murderess but emerges into a woman who I sympathise with. The priest evolves from a green young priest who has no idea of what to say and feeling unable to help Agnes, into accepting that anything he can offer is better than nothing, and that his duty is to Agnes and not himself or the state.

I would have liked to have more of an insight into the politics and legal side of the proceedings – I would have liked to know more about what went on at Agnes’ trial, but Kent focuses on what Agnes is facing after the trial and her sentencing. Obviously, there is more emotional payout by focusing solely on families and the condemned. To be honest, if I want to know more about the politics and legal side, I should just pick up a non-fiction account – and now I am going to have to run to the library and see if there are any non-fiction accounts in English.

The reason I picked up Burial Rites to read was because Hannah Kent is (was?) a post-grad student (and undergrad) at Flinders University, where I’m currently enrolled. It’s nice to think that we have shared the same courses and know the same flinders people. I am grateful that she attended Flinders, or else I may never have picked up this amazing book!