Top Ten Most Anticipated Releases in the Second Half of 2016. I’ve included releases from July, August and early September. I’ll probably do another list similar to this in late August/early September when more release dates are available. One of my favourites, Geoffrey McGeachin’s Charlie Berlin series, will be due for a new book soon, but so far I haven’t heard anything about it.

Sean Black’s The Edge of Alone – July 10. The 7th in a great series about Ryan Lock, who works in private security but always seems to find himself in deep trouble. Already pre-ordered.

Scott McEwen’s Ghost Sniper – July 12. A favourite series of mine, and one of the few American military fiction authors who I don’t want to give a lesson on tolerance to. His characters are real, but so so tough. Will buy on kindle.

Ace Atkins’s The Innocents – July 12. I’m hoping that this one can recapture the awesomeness that was the early releases of this series. Has one of the most memorable sidekicks ever written in Boom. Netgalley copy.

Alex Kava’s Reckless Creed – July 26. Cute series about a man (called Creed) who trains service dogs. They are still thrilling, but I will admit to reading mostly because of the dogs.

Stephen Leather’s Dark Forces – July 28. SPIDER SHEPHERD! The best UK thriller series, in my humble opinion. My favourite series, and I always pre-order this one. (and often end up with a hardback and kindle copy.)

Jack Coughlin’s Long Shot – August 16. Excellent series about a sniper – was the first American military fiction author that I ever enjoyed. The last book made some questionable choices regarding characters and who would be featured in this book, but I’m waiting to see how this one turns out. Will order from library.

Chris Ryan’s Bad Soldier – August 25. The Fourth book in the Danny Black series. Each one is just as good as the previous release – all have been four star reads for me. Black is a believable character who you can’t help but root for. Will order from library.

David McCaleb’s Recall – August 30. I’ve never read McCaleb’s work before (he might be a debutant for all I know), but I saw Recall on netgalley and immediately wanted to request it. I’m trying to get ahead of my reviewing queue before I request any more, but this is high up my list of anticipated new releases. Netgalley/kindle copy.

William Kent Krueger’s Manitou Canyon – September 6. Kreuger writes atmospheric thrillers, of which I have read three or four, but I am so behind on the Cork O’Conner series I know I should just pick up the next book in the series and read my way up to these new releases.

I love books that feature soldiers, especially book series that follow the career of a soldier. Over the years I have read many books with military themes, I started off reading British series written by ex-SAS soldiers, but I quickly diversified into reading quite a few series written by authors from all over the world. This list of 5 series incorporates finished series and ones still in progress, from both the US and around the world. If you love characters like Jack Reacher, some of these series might be up your alley. I’ve included a link to the Goodreads series page, and the book cover links to the Amazon page for the first book of the series. 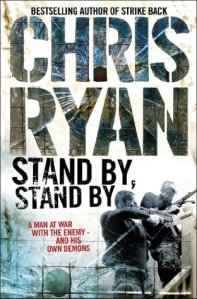 Geordie Sharp was my first exposure to a series that follows the career of a soldier, and it has stuck with me after finishing the series many years ago. Chris Ryan is an English ex-SAS soldier who has now turned his attention to writing, and the Geordie Sharp series was his first foray into writing fiction. Stand By, Stand By is the first book in a completed series of four, and each one gets better and better. The final book was like a punch in the guts while standing next to a claymore, and I was a mess of tears for a good chunk of it. While not particularly spectacular writing – Ryan’s later books are of a higher quality – this series gets an A+ for plot. 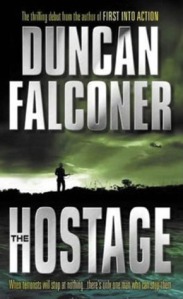 Stratton is written by another English ex-Special Forces soldier and is in some ways, similar to the Geordie Sharp series. However, these books follow the career of a SBS soldier, and so much of the action takes place underwater, in boats, submarines and on oil rigs. For me, this is perfect because I love nautical themes. Stratton is a really aloof character and over the space of 8 books you get to know a little bit about him, but it’s nice to read a book in which the main character isn’t socially capable or a glory hound. There are 8 books in this series, and although it hasn’t officially been ended, there hasn’t been a new book since 2012’s Assassin. Rumours of a Stratton movie have made me very excited, but at the same time, cautious – it’s hard to portray such a anti-social but good intentioned guy. The first book in this series is The Hostage, and while it is interesting, the books get better and better. 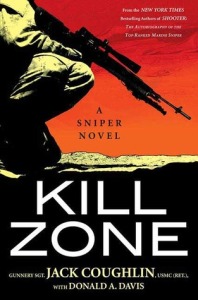 The Kyle Swanson series was the first American series that I fell in love with. It is a series of 7 books (the 8th is due later this year) with hopefully many more on the way. Coughlin is superb at telling a military action story from an emotional standpoint. Kyle is an interesting character, and he is supported by a great cast of other characters. My favourite female character in a military novel appears a couple of books into this series, and she is affectionately known as Coastie, and she is kick ass awesome! It’s refreshing having women painted as being competent in a skill that is usually considered to be the man’s prevue. As Kyle Swanson is a sniper and is attached to his special custom rifle, known as Excalibur, this series is great for fans of sniping or precision shooting. 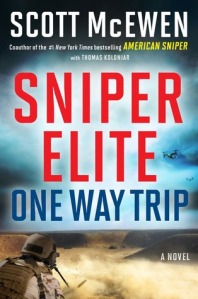 I added the first Sniper Elite book, One Way Trip, to my TBR by accident – I thought it was a Jack Coughlin book for some strange reason (I get my snipers mixed up, apparently). Sniper Elite is a newer, still ongoing series, with three books currently published. McEwen balances political intrigue and military action really well, and I find often action thrillers tend to avoid any political intrigue in fear of making it  a political thriller. I am also in love with the main character, Gil Shannon – he is the perfect blend of soldier and good guy. Some parts of this series are a little bit too ‘MURICA! for my own sensitivities, but compared to many other American action/military fiction, this is sedate. I think coming from reading Australian/UK fiction this aspect is the hardest for me to acclimatise to. I also find American novels to often have more of a team feel – as opposed to the single operator dominated British fiction – and a lot more gun loving. Overall, this series has been a solid four star earner, and I am looking forward to the next instalment! 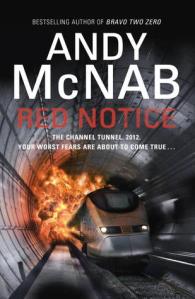 The Tom Buckingham series by McNab is a new, ongoing series that is more accessible than McNab’s previous works. I’ve always been a fan of McNab, I find his writing to be action packed and his plot lines tight, but felt that they sometimes lacked emotional depth. This new series rectifies that. I’ve read the first two books in the series, with the third, and latest book, waiting on kindle. The second book, Fortress, gained a rare five star rating – it was sensational. A lot of purists who loved McNab’s Nick Stone series dislike the Buckingham series because it has some feelings in it – but I think it improves the plotlines to no end. I would recommend anyone who likes fast past thrillers to pick up the Tom Buckingham series, because it is a more traditional thriller as opposed to a military thriller.